Rob Jones
Maidenhead, United Kingdom
Ive been painting miniatures for about 15 years now and loving every moment of it.I often take painting commissions and try and get some painted minis on eBay on a regular basis. I play a large range of games but my favourites are Warmachine and Lord of the Rings. Always happy to receive comments on my posts. Thanks for looking!

Hi all,
As promised, here are a few pics of my growing Circle of Orboros force for Hordes. I don't have that many minis completed yet but i'm chipping away at them gradually. First up is my Warlock, Baldur Stonecleaver. He is central to the 'Constructs' theme of the force because he is the guy that creates everything then holds them together. I have a pic of him on his own and then with a few Wold Stalkers (I havn't finished the whole unit yet) 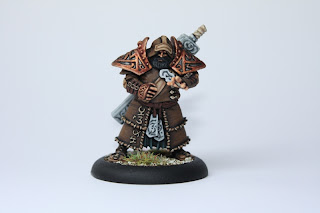 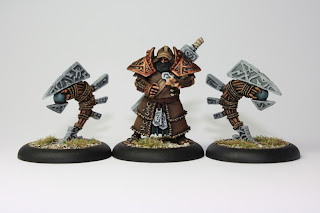 I'm going with the wood and stone look with lots of mute browns and a deep blue. Simple but looks cool on the table. The next pic shows the first beast for my force - A Wold watcher. He is a light beast and so a little smaller than the Wold Guardian ive just picked up. 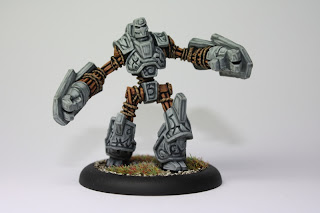 So just a few minis to share but hopefully more completed in the coming weeks. I'm waiting for the MKII rule book to be released so i can start gaming again. My buddy has trolls and they are great fun to play against - except when they keep making their tough rolls...
Ive had the terrain bug over the weekend and ive been painting some buildings and making some generic terrain tiles. Not a huge fan of making terrain but i get the urge every now and then. Hopefully i'l be able to post pics of games now that i have something at home to play games on.
cheers
Rob
Posted by Rob Jones at 12:56 AM

Thanks Christopher! I did these guys a little while ago and really want to add to them soon.

P.S. Really liking your Germans, keep it up!

Your painting style is beyond excellent! :)

You are too kind BOTWT, thankyou very much.

I'm really enjoying your starwars minis on your blog, i have some that i have repainted also so i should post them at some point.

The look pretty bloody sweet to me :) Baldur's an awesome warlock in-game... I just wish his mini was a little more dynamic. Great job!

Thanks gdaybloke, heres hoping the eventual Epic Baldur has him a bit more animated!

Heeeey, you're back! I've been looking at your new stuff and they are a blast! You are one of my favorite painters so I was kinda sad that there was nothing new on your blog.

I am liking your wood colours on these a lot!

I'm back with a vengeance!

Thanks for the comment, i'm a big fan of your painting also, keep up the good work!